TRAVEL, TRADE AND COMMUNICATION ROUTES
ON THE NORTH EDGE OF THE ANATOLIAN PLATEAU

In this exercise, you will be working in the area of the Avkat Archaeological Project, which centers on the modern village of Beyözü (Roman/Byzantine Euchaïta, Ottoman Avkat) in the Çorum province of modern Turkey, which is located at the northern edge of the Central Anatolian Plateau.  The project is a diachronic regional survey that aims to discover more about the settlement and environs of a provincial town of middling size and import, as well as its role in the larger region.  This latter endeavor includes a focus on routes of communication and how they might have affected life in the ancient town.  In the exercise you will use GIS tasks including acquiring data, mosaicking, coordinate transformations, slope and aspect, reclassifying, generating a cost-surface coverage and determining the least-cost, most efficient paths through the landscape between two larger cities in the region, Amasya and Çorum, in an attempt to identify where these routes may have been situated and whether, if it all, they passed near Beyözü.  This exercise takes multiple factors into account and an anisotropic – direction dependent – approach.

Bell, Tyler and Gary Lock. 2000. "Topographic and cultural influences on walking the Ridgeway in later Prehistoric times," in Beyond the Map: archaeology and spatial technologies, edited by Gary Lock.  IOS Press, Amsterdam and Washington, D.C,  85-100. 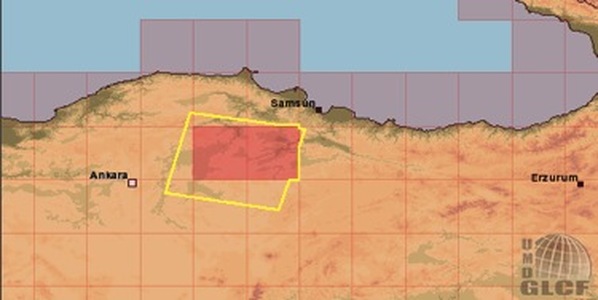 This image illustrates the step necessary to download the SRTM data for building a GIS in which to undertake least cost path analysis. To download a .pdf copy of the exercise with the steps outlined in full detail, please click here.

Some issues to consider are impact of colonization; factors beyond environmental concerns in choosing routes; resistance from local populations; etc.  The following readings would be a good starting point in further exploring some of these questions: