PILGRIMAGE AND TRAVEL
IN THE ANCIENT WORLD

This course will investigate the mechanisms by which people decided to undertake pilgrimage in the ancient world. What is pilgrimage? What is a pilgrim? Why did they decide to go on pilgrimage? Did they even think of themselves as pilgrims? Where did they go, and what did they go through to get there? What implications did their journeys, and the destinations themselves, have on the world they traveled through?

These and other questions will be explored with an emphasis on archaeological evidence the pragmatics of pilgrimage travel. Drawing on examples of pilgrimage and travel from around the world, we will also consider contemporary literary sources and later (medieval through the early 20th century) travelers' accounts. Not only will long-distance travel be considered, but even questions of regional and local pilgrimage and rivalry. Continuity - or lack thereof - of road and communication systems will be considered, especially within the context of how they impact modern travel and communications; infrastructure and logistics are still important issues in today’s world, and you will be encouraged to consider the implications of pilgrimage travel in the ancient world for our own.

Throughout this course, you will learn to critically consider how, and why, people were traveling in the ancient world. Under these very broad questions, we will explore:

1. Motivations: Why did people decide to undertake pilgrimage in the ancient world? What sort of economic, political, religious or other factors went into their decisions to travel?

2. Context: What sort of world were people travelling through, and how did that impact where and how they went?

4. Infrastructure: How did they get to where they were going?

You will gain a foundational knowledge from which to critique - and improve upon - methods of investigating pilgrimage travel in the ancient world, through both literary and archaeological sources. An archaeology of ancient roads and communication systems is an exercise in filling in the gaps and learning to synthesize data that we do have, an exercise that is important and useful not only in archaeology but in any undertaking; thus, you will learn to apply this skill to real world experience.

There are no required textbooks for this course. For more information on readings for the course, please go to the password-protected forum at the Joukowsky Institute wiki for ARCH 0720.


Visit the Resources page for more information on pilgrimage- and travel-related initiatives around the world, as well as suggested further readings for your research papers.

For weeks 3 through 7 of the semester, you will submit 1-page (400-500 words) response papers to that weeks’ readings, lectures, and discussion. Rather than writing before class, you will have the weekend following each Thursday class (thus, Sunday at midnight) to submit your responses electronically to the class blog, with the specific intention of drawing out research questions that you might want to pursue for your final paper. These can change from week to week, but the intention is to get you thinking in-depth about your final projects early on; grappling with the issues will also help you absorb and benefit from both the readings and the lectures. These ‘fits and starts’ will be graded for completion, but if it is clear that you are not thinking critically about the issues at hand, points will be removed.

You will write a proposal for the research project that they have been developing out of the ‘fits and starts’. The proposal should contain four elements:


An example of a proposal will be provided so that you will have a clear idea of the elements and structure of what you are expected to provide. The goal of the proposal is to get you to the next level of thinking about your final project in terms of feasibility and structure, as well as an exercise in learning how to write a good proposal as a practical skill. Due Sunday, October 27 at midnight.

You will provide an annotated bibliography of at least five sources; these do not have to have been read in their entirety, but you should explain what you foresee as the relevance to the issues you are pursuing in your final project. Examples of good and bad annotated sources will be distributed as a model. This will build upon the proposal in promoting your understanding of the scope, structure and feasibility of your project. Additionally, it will be an exercise in learning how to research for sources and grasp the usefulness of sources both before and after you may have read them. Due Sunday, November 3 at midnight.

You will write a final paper (8-10 pages) pursuing a research question that you have developed in stages throughout the course of the semester (see above sections in Grading & Assignments). The paper should call on both theoretical scholarship and archaeological case studies, and will be evaluated according to the following rubric (also used for evaluating the drafts described above): 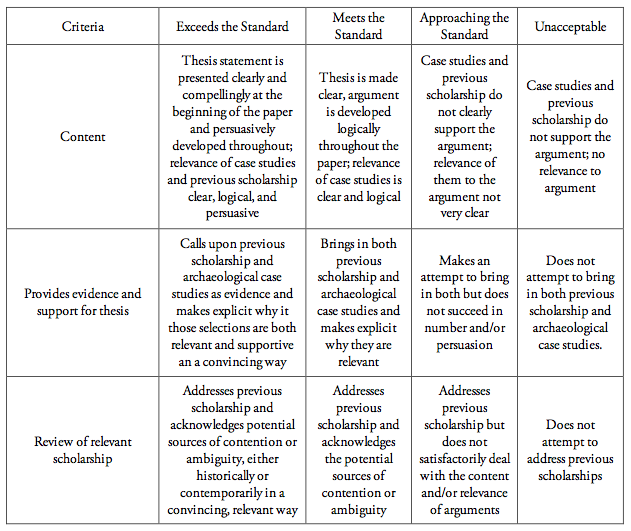 This rubric relies on the assumption that after working through the interim assignments described above that there is a clear thesis statement that will already be worked out by the time you start working on the paper.

The process of building up to the final paper should greatly facilitate achievement of the course goals and objectives outlined above, especially the third goal: “Students should be able to formulate questions appropriate and relevant to archaeological research, and subsequently to develop coherent arguments, synthesizing them with a critical consideration for the nature of ancient travel.”

The final paper will be due on the date of the class’s scheduled exam (there will be no final exam).

Week 1: Introduction to travel and pilgrimage

thursday, september 5: the places and the pilgrimages

Assignment: What is pilgrimage? On the class blog, make a short (1-2 paragraphs) but thoughtful contribution on what you think pilgrimage is, by Sunday, September 8 at midnight. We’ll talk through these in class on Tuesday to come up with a working definition of pilgrimage that we can use throughout the term. At the end of the semester, we’ll return to this issue and reflect on how our conceptions of pilgrimage might have changed, and why.

Week 2: What is Pilgrimage?

thursday, september 12: in pursuit of pilgrimage


Assignment: On the class blog, write about an experience you’ve had that you would describe as a pilgrimage.  How has your perception of that experience changed from reading about the theoretical premises of studying pilgrimage? If you need inspiration, you can select an article about modern pilgrimage from one of the dedicated journal issues (i.e., CrossCurrents, The making of saints [e-book] : contesting sacred ground / edited by James F. Hopgood, etc.) [I will compile a list from which the students can browse and choose.]
Week 3: archaeology, travel, and pilgrimage

tuesday, september 17: what do archaeologists do?

Week 4: the places and the pilgrims

Week 8: Travel: On and Off the Beaten Path

thursday, october 24: back to the beaten track: life on the road

Assignment: Project Proposal due on Sunday, October 27 at midnight.
Week 9: Taking the Paths Provided (or not)

Assignment: Annotated Bibliography due on Sunday, November 3 at midnight.

Week 10: Pilgrimage in Christianity and Islam

thursday, november 7: accounts of the Hajj

Assignment: writing about pilgrimage: in class, we will watch National Geographic’s Journey to Mecca, a documentary about Ibn Battuta’s 14th-century journey to Mecca. On the class blog, post your reactions to the film, how it reflects the textual account, and what different kinds of information we can interpret from the various kinds of evidence. 400-500 words, Sunday, November 10 at midnight.

Readings
Week 12: Pilgrimage and Travel in the Modern World

Week 14: There and Back Again

Assignment: Instead of readings for the final class, go back through the definitions of pilgrimage that we suggested and formulated at the beginning of the term. On the class blog, reflect on how your conception of pilgrimage has changed (or not), and why.

thursday, december 5: there and back again: a recap
Week 15: Reading Week (No Class)